Product images are for illustrative purposes only and may differ from the actual product.
Price: ฿10,359
In Stock
Webike Points: 104
Applicable Models:

Here is the instruction manual.

Gas shocks with infinitely adjustable damping and initial adjustment on the rebound side.
Set at the perfect spring rate, it provides enough suspension stroke to improve road-following performance.
Ask a question I think that performance is a good product, 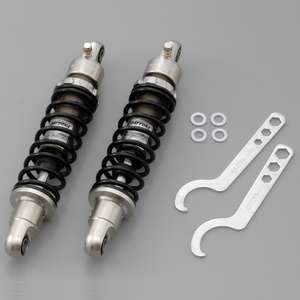 I think that it is a better product though evaluation, since I would like to choose the color that suits my car body
I would like to increase Spring's color variations.

私はスーパーカブ50に乗っている. もっと低いサスペンションを得るためにモンキヨンを購入した. 少しの加工をして装着をした. やや低い感はあるが、それでも満足している. ポジションと趣きではぴったりのようだ. I am on Super Cub 50. I bought a monkeyon to get a lower suspension. I wore a little worked. There is a slightly low feeling, but still satisfied. It seems perfect for position and taste. (translated by Google Translator)

I can understand the feeling of firmly grasping the road surface 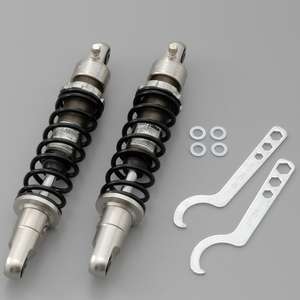 Because OEM was unstable and unreliable Shock,
In exchange for Swingarm exchange, I also exchanged Rear shock.
Although for MONKEY has appeared from other companies alike, it is also troublesome to repair and repurchase,
I chose this highly satisfied as well..

Select 280 mm according to Swingarm's 4 cm Long.
Setting matches the initial setting in the manual.
As aimed, the driving performance changed greatly in a good direction.
There is no feeling of Funafunha of the opening, feeling to grasp the road firmly,
Sus is working properly, so running will also stabilize.
Color like dull shining Gun meta is also good with luxury feeling.

Although it is expensive, I think that performance and satisfaction are much higher than products at half price.