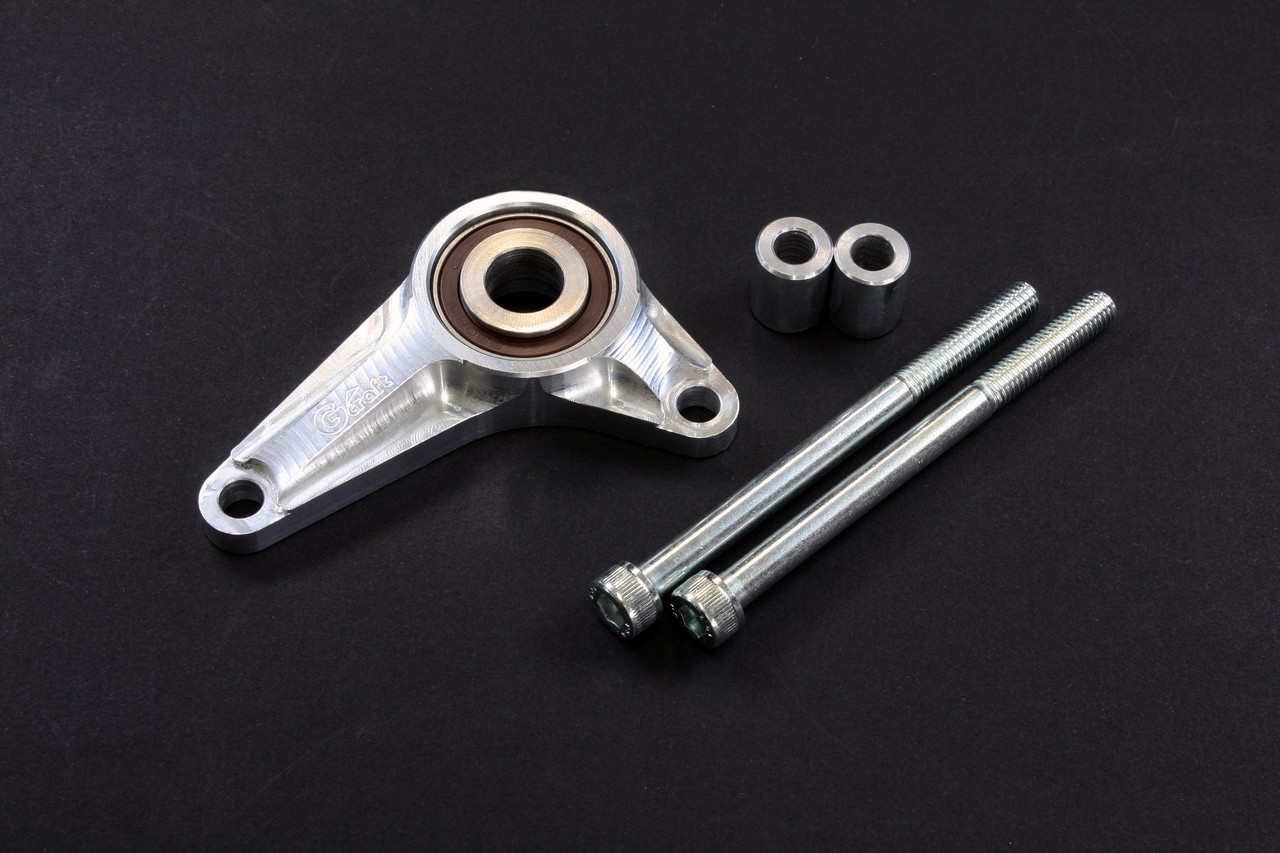 The transmission on my GROM felt very agricultural right from new. Their was minute play in the shift shaft, which can only increases because of design. The Shift Guide by G-Craft was the first modification I preformed to my GROM. The CNC machined G-Craft Shift Guide looks trick and it's a shame you can't see it once it's installed. Installation requires basic tools (to remove, fitting tool supplied) and skills. I think this support will minimise future play developing in the gear leaver shaft . I still found hard shifting and few false neutrals after fitting, blue printing the shift mechanism is probably the only complete cure to stop hard shifting (and false neutral embarrassment).

换上这个档杆轴承座，换挡感受都不一样，原厂那个之前摔车的时候摔变形了，原厂的换挡时感觉还是有点生涩，并不顺畅，而且拆下来才发现原来这么重，现在换上了新的轴承座，换挡时顿挫感更小了，也更平顺！值得推荐车友们选这款~ Putting on this gear rod bearing seat, the shifting feeling is different. When the original factory was crashed, it was deformed. The original shifting gear was still a little raw, not smooth, and it was found that it was so heavy. Now, I have put on a new bearing seat. When I change gears, I feel less frustrated and smoother! It is worth recommending riders to choose this ~(translated by Google Translator)

You can experience the effect.

Combined with Endurance's Rear Sets,
Gear changing became comfortable.
As well as the products of the overseas Bearing Specification, it is even more pleasing if there is a setting of Black color.

It looks like a product with different evaluation, but I felt the change after wearing it. Shift feeling will be better. The price is high, but the texture is high and the accuracy of the item is high.

Gold If you can afford it, why do not you buy it?

【What made you decide the purchase?】 Shift touch feeling was strange when purchasing a new car
【How was it actually used?】 I do not really understand
【Was it difficult to install? (Hard parts case)】 Installation of products is easy, but until accessing is Large
【Please tell me the point of installation and hang (in the case of Hard parts)】 Sprocket cover can not be removed without 8 mm semi ? Deep socket. Even if you can remove Cover, if you do not loosen the footpeg the tool will not reach Bolt from the front.
[Is there anything I was disappointed about?] Should I buy it after adjusting the Pedal position before buying it?
【Have you compared items?】 Nothing

- Decision of purchase
Net search - We purchased with reference to BigImpression.
Improve Nutra's entry when Grom stops! As an improvement measure with GEAR at Stop & Go

- Impression after using it
It is true that as you mentioned in Impression Neutra entering GEAR entering while driving, before and after installation - - - There is not a dramatic change, but it seems to have improved.

- Installation is difficult
Installation is very easy. Using 8 mm TWrench Socket, remove FSprocket cover and use 10 mm Rachet TypeSpanner to remove Shift link. Finally, 8mm TWrenchSocket removes the engine side Bolt, but Engine side Bolt was slightly stiff! But you can remove it! Finally Firmly kun Body and Included Parts : It is the end by assembling it by the reverse procedure using. It takes less than 30 minutes to work ~

- Others
My favorite car Grom uses the over rear Sets 4 - Positions Tandem positionKit, but it can be installed without processing and the compatibility is also perfect! The moment I saw the delivered Firmly - kun - - - When I look at the published pictures I feel Large Yui, but it was Compact and nothing else! "With this, this price - ー ー ー" It is a secret that I shouted in my heart (Lol) I will do a good job!

Perfect fit and design like you would expect from G Craft products . All up it took about 5 mins to install and Makes shifting amazingly smooth with heaps better gear selecting feel .

I replaced it for Rear Sets and bought it to improve Shift feel.
I think that there are individual differences in feeling, but compared with not being able to wear it is Snap.

It feels like it got easier to enter Neutral, but dramatically ShiftWork does not feel better. I can not think that the stagnation while stopping was solved. It seems to prevent intrusion of Garbage, so it may be better to put on rather than without.
Large with no problem on installation No problem.
The photo is Gold color.

With Grom there is no such thing!

It was Clutch operation with doubt from Grom 's break-in, but I was convinced that I ran further 200 km after break-in. Obviously there is a problem with operability!
I intended to put it in second gear (There was a feeling that it caught cuckoo) It is frequent that there is not actually in it, preparation for entering 4th speed (Lightly press the top of the foot to Shift Pedal) If you do, the skyful condition often occurred. Nutra is a very difficult technique! Stress It was fully open.
Sometime I found this item. I listened to the story that there was an effect even in Motorcycle shop, but when I tried to wear it, it improved drastically obviously! With SnapSnap and light power it easily enters GEAR. Neutra can also be Smooth. Well, finally I just got to be able to take a decent Shift change, but I was impressed! Honda should release it as such a part improvement plan. If NORMAL's Shift change, it tends to be rough, and the worst Oil leak from Seal is concerned.
Anyway, if you want to shift shift comfortably Naturally you should buy and there should be no mistakes!