Filter
Write a review and get Webike Points! About quality and texture: Good quality

About the user experience: I'm satisfied with the product

Products that can be purchased together

Price and comparison with other products: Good price

About shipping and packaging: Well packaged and shipping as scheduled. Acquired for Honda Monkey. When purchasing a moped, a filter made of hand-held equipment was in it, so the question of replacing the filter was acute. The NTB filter turned out to be slightly larger in size, but rose perfectly, densely. The quality of the filter was nice. The air filters of this company I put in all my mopeds, there are no complaints. View detail Filter is well built, but does not fit in the nps50/chf50 air filter housing. Was hoping to use instead of a cone style filter but I will have to look for other options now. View detail TO SAFE BREATH to my Bike

ITEM : NTB Air filter (for CB400SF VTEC2 2003) ENG: when i open the air cleaner case i was shock because some insects and moth in the case and some over takeing engine oil coverd all around the case so i clean it up and change the air filter, after the changed, throttling is more smoothe and quiet accellation is more progressive my riding condition is Raining, Dust , and most of all... Very Humid area may i think i need change the filter more several days... every 15,000km or 25,000km filter material is paper. English: This is NTB's compatible air filter. CB400SF I used it for 2003 model year There are a lot of year changes, so there are few compatible parts. After replacing the air filter, a smooth throttle response and a smooth feeling of acceleration were confirmed. It is recommended to clean the filter case as well as change the air filter. There are also worms View detail The quality is as good as OEM Product, and the cost performance is good.
If you are able to remove the tank by yourself, you can easily replace and install the tank without having to buy an expensive OEM product. View detail It works fine. And even cheaper!

It is a very good cost performance and fits the OEM air cleaner box very well. I felt that the quality of the product is similar to OEM, as it can be driven in normal setting even on rainy days without any problems. View detail

We have been using it for 3 years and it has been durable without falling apart. View detail [How is it used?
Used for HORNET 250. Replaced because it had never been replaced since delivery.
How was your experience with it?
I have driven about 200 km since the replacement without any problems.
How did it compare to other products?
Almost the same shape as the OEM Product, so there is no concern about using it.
[Points to note]
Nothing in particular. The only thing I would say is that the price is a little high. View detail [How is it used?
OEM Replace
Was the one you received as per Image?
Yes
Was the installation difficult?
Easy
How was your experience with it?
no problem View detail 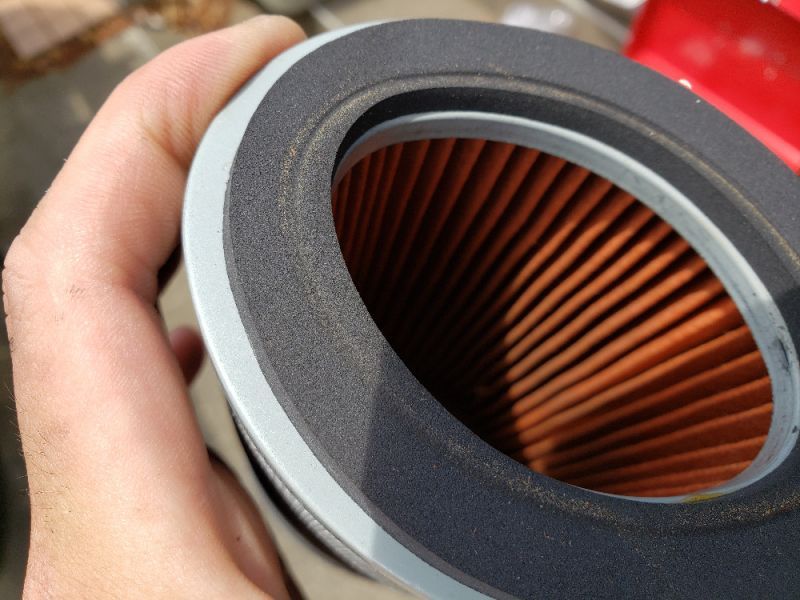 First of all, I think the price is high. The difference from OEM is that the mesh holes are small in size. I think that the small holes increase the inhalation resistance. I wonder if they are doing their job properly because I have used them for 2000 km and they are not dirty at all. I have used it for 20,000 km and it has not been dirty at all, so I wonder if it does its job. I have used various external air cleaners in addition to this one, but I think the OEM was the best. I will go back to OEM for peace of mind. View detail 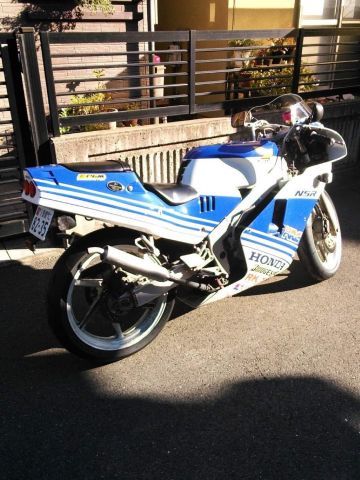 [How is it used?
Introduced as replacement for OEM of NSR250R MC18/88.
Traveling:Touring, mountain passes
Period of use:Used for about 2 years.
Chamber is NORMAL, and Others has no special custom.

Was the one you received as per Image?
As per image. It fits tightly and cannot be installed. There was nothing to worry about.

Was the installation difficult?
I just need to replace the OEM air filter, so it can be done without any problems.
It is delivered with oil applied and ready to use.

How was your experience with it?
The OEM air filter had probably not been changed since the car was new and was in tatters. (It had something on it that was the same age as me or older...)
Since this was a change from the previous system, the air intake efficiency was naturally improved and the system could be used without trouble.
The cost was good and I was satisfied with the large variation.
No Gap in Setting occurred.

[Included Parts:were they on?
None

[Was there anything that disappointed you?
None

[Opinions and requests to Manufacturer
Although I have already given up my vehicle, I hope that you will continue to sell Replacement for OEM.Parts for NSR250R including this product for a long time to come.
Although there are environmental regulations, I believe that the 2ndReplica is a legacy that should be left to the future. I know it's hard for companies to keep production lines, but I hope the industry as a whole will follow this trend. As a rider, I hope that this will be the case. View detail 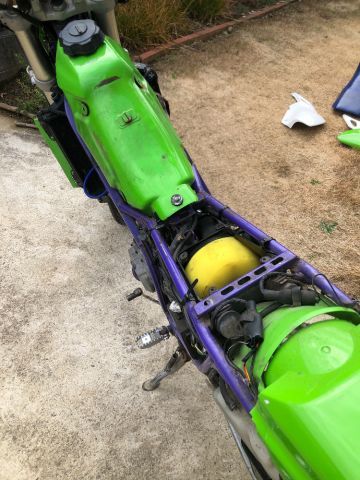 The air cleaner that came with my car was dirty, so I switched to this one. It has plenty of oil in it and does a good job. View detail 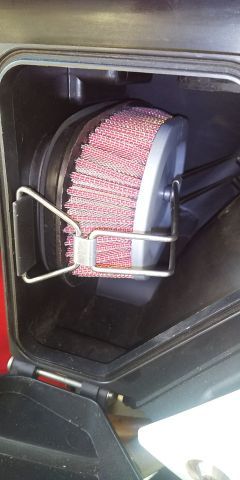 try and see it for what it is

I looked at the air filter on my XR250 (MD30) and found that the 10 year old twin air was getting close to its limit.
Make it a Twin Air Filter-only supply.
K&NFilter.
Return to OEM
OEM equivalent AfterMarket products that are close to the original.

So I saw a picture of NTB's XLR250 cleaner and it looked K&NFilter chic, so I bought it.
When I looked through the Filter in the sun, the Filter section was thicker than the K&NFilter, but it seemed to be more efficient.

The thickness of the CleanerSize is a little thin, so the Bracket of the Stopper is rattling, so I bent it a little to make it stronger and it became better.
However, it didn't fit well, so I looked at it on GlassTable and found that the hitting surface was slightly distorted.
So, I bent the hitting surface to fix it. Once I fixed it, it was perfect. That's where I wanted the accuracy to be.
That's where Minus1 comes in.
When I ran it, it was a summer setting, but it wasn't bad in the winter either, so I thought it was a winner. I felt that it was a hit.
It's cheap, so if it's good for the Season, it's Repeat.
If not, I'll think about it again. View detail In a sense, it's an OEM diversion.

I bought it when I was making Air cleanerBoxSpec. Box as it is and used it with Custom to make 90cc of Tube and Air cleaner.
CUB's 90 is no longer in production, so OEMParts are getting harder to come by, and they're expensive even at Oakshon (lol).
No problem as it is OEM compatible.

good point
The intake air volume can be increased without changing the air cleaner box.

It's cheaper than buying it at Oaktion.

OEM compatible, so quality is not a problem.

It is also durable.


If your car is out of print, it is difficult to supply the parts, so it is better to buy OEM compatible parts.
If you use the Air cleanerBox, you can be assured that the carburetor setting will not be affected even in the rain. View detail 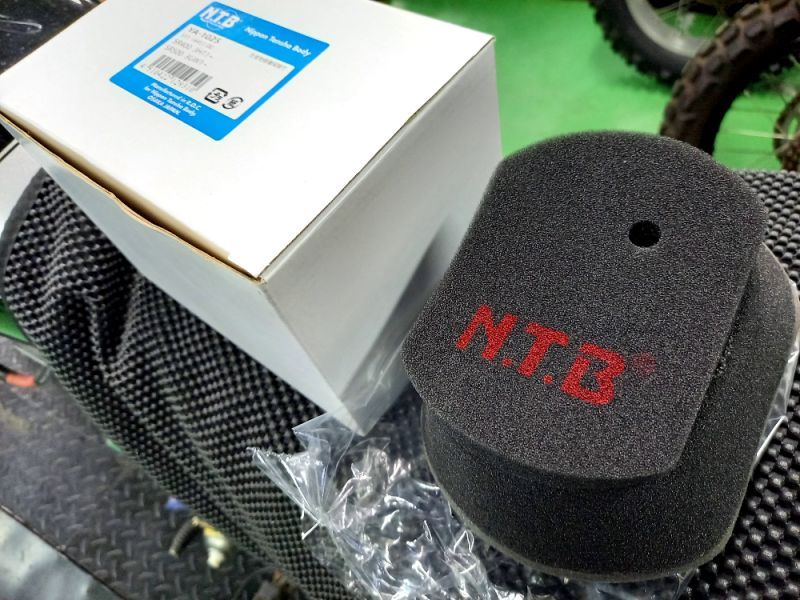 [How is it used?
Used to replace OEM Filter which was deteriorated in maintenance of SR400.
OEMFilter 5Y1-14451-00 costs about 4000 yen, so I decided to use genericParts.

How was your experience with it?
Size, shape, and material are comparable to OEM Filter.
I have used the NTBFilter for other models before and had no problems, so this is another Repeat.
The Wet Filter needs to be soaked in oil, but it is already moistened with the appropriate amount of oil, so it is not necessary to use a wet filter.
You can install it as it is.

How did it compare to other products?
Comparison with OEM… I think it is the same performance quality as OEM.

[Points to note]
The Urethane foam Air CleanerElement has a Merit that can be washed and reused, but on the other hand, it degrades and polishes up, so it needs to be replaced every few years! View detail I bought this to use on my Off-road competition vehicle.
I modified the air filter box to increase the power of the car.
If the course or season is very dusty, the NORMAL Filter alone will not prevent dust from entering the course.
I don't think I'm comfortable with the ability to prevent
This is why I added this NTB UniversalFilter to the OEM Filter.
The idea was to prevent dust and sand by attaching it.
It is easy to blend with filter oil, and you will not see dust in the carburetor after use.
It's not much anymore, so I feel it worked.
It is also a great Point that can be processed and used without any hesitation because it is cheap. View detail