Imagine extreme thickness was normal. It is cold unless you wear HeatTEC etc in addition to the cold in northern Tohoku.
I want you to make it thicker.

Excellent operation feeling although it is warm

Commuting for 10 km on one way
Winter Gloves thought that warm operability would be sacrificed
Previously used Gloves had to change Clutch's play adjustment
This Gloves can be used without much incongruity even compared with 3 SeasonGloves.

I think that performance is seen in the amount of money

It is an impression that I used for touring around 300 degrees around the temperature of 10 degrees.

As a precondition, even in a room where heating is winter in winter
It is cold end chiropractic about cold fingertips.

<Looks>
It is a little tough, but I personally like it.
I think that it is also very useful that the palm part is synthetic leather.

<City ride>
I did not feel the cold in the speed zone like the city ride.

<Expressway>
Although there was sufficient cold weather at the speed zone of the expressway
I felt the cold air around the fingertips, especially the ring finger and the Small finger when I ran over 1 hour.
It is not so much that I can not drive, and since it is originally chilling, it is better to have done with this degree
It can be said that it is amazing.

<Operability>
Winter Gloves' s fate, but from summer Mesh Gloves
Since the operation feeling changes only when I changed it, I feel uncomfortable until I get used to it.
Immediately after purchase I think that it is better to use it after accustoming to a hand and adding a habit.

<Mountability>
Gloves for summer uses M or L by Manufacturer
This Gloves bought L.
Because the mouth is a little narrow, it takes a little time to install, but once it is attached
No problem.
It has become a type that stops hitting the wrist with Magic tape
Depending on Jacket, cuffs may interfere with Gloves, so be careful.

It may be troubled because there is a reasonable amount of gold
As Total I think it is a performance that matches it.

If there is a problem, in the future if this cold weather performance is to be the standard
I am worried about spending at the next replacement ? ? ?.

I tried to use immediately 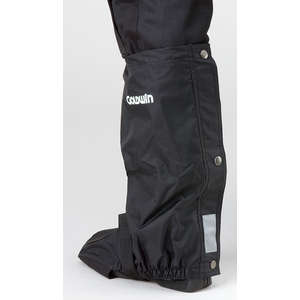 I bought it in preparation for long distance touring, but I decided to use it on my way home on the way home. It was easy to wear and covered firmly. Small I ran for 4 hours in the rain and stopped, but it was good that the shoes did not get wet. As a precautionary point of use, because it covers the toes, sole of the shoe slips only on that part. People with tiptoe need to be careful not to slide at signal waiting. When walking I think that it is important to remove the toe Cover if emphasis on the heel.

I decided to use it immediately.

I bought it in preparation for long distance touring, but I decided to use it on my way home on the way home. It was easy to wear and covered firmly. I was glad that my shoes did not get wet. As a precautionary point of use, because it covers the toes, sole of the shoe slips only on that part. People with tiptoe need to be careful not to slide at signal waiting. When walking I think that it is important to remove the toe Cover if emphasis on the heel.

It is price competitiveness. Mesh Gloves of the same Manufacturer was a good impression so I bought Gloves for winter.
I bought XL but the part of the finger is long and it got over the fingertips ahead.
In actual use, it seems that a layer of air can be formed in the remaining part, coldness of the fingertip was relaxed by Large amount than Glove used before.

Wind StopperSpec. Is your favorite

The best thing is that Wind Stopper is adopted in the half circumference part of the fabric.
Thanks to this there is no passing of wind or cold through the Fleece. (However, it permits moisture permeation)

I am using with Komine's WIND JAMMERSII.
Because I am on the Scooter's Long Screen & Full face helmet, the coldness behind my neck is better than the front.
So I use the Wind Stopper face on the side of this side and Fleece on the face side only.
In addition, putting the fabric inside WIND JAMMERSII, almost the cold is perfect.
It is an essential item of winter for myself.

It hurts a little expensive but it is reasonable if we consider performance and quality. Since Jacket which I have now has many Black systems, colors were also good appearance colors in the New model, so I bought it. The color of the real thing arrived was not brighter than I thought. I wore it immediately and went to Touring overnight, but the cold weather protection is a passing point at this time. I think that all seasons correspondence and ease of use are good if you remove the windproof lyre. However, in the mid-winter, I thought that the neck was around the neck in Large and was tightened with the collar cord Adjuster, but I thought that the draft wind invaded and felt cold. I ordered XO with my height 176? Weight 74?. Size is Exactly. Like disappointment like a disappointment is a closing Button on the front opening Zipper If you do not use both hands when you stop fasting you can not stop it, you can be stopped with one hand if you are a little Large and gloves are thick in the midwinter so do not remove gloves I regret not being able to stop it. Well I can not forgive because it is Jacket I liked the appearance with a new model! There is no product to compare.